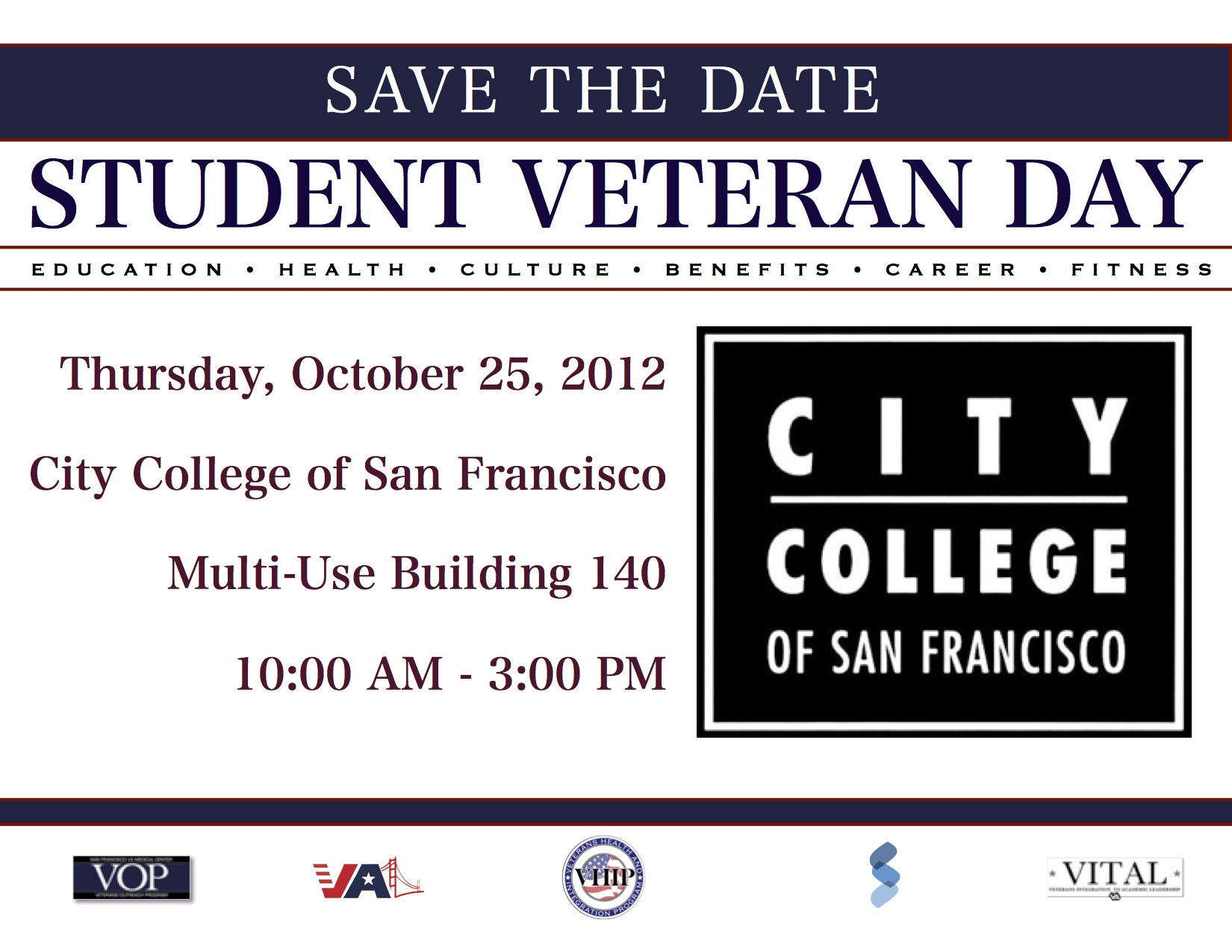 The Veterans Outreach Program (VOP) began as a collaborative effort between City College of San Francisco and the San Francisco VA Medical Center (SFVAMC), and has since expanded to include participation from colleges and universities throughout the San Francisco Bay Area, Veterans groups, philanthropists, the VA’s national VITAL initiative, and nationally-recognized public figures. The Post-9/11 GI Bill, passed by Congress in 2008, expanded educational benefits for Veterans who served in the Armed Forces on or after 9/11/01, and as a result, unprecedented numbers of former service members are enrolling in educational programs to utilize their GI Bill benefits.  City College of San Francisco has experienced exponential growth in its Veteran student body, from 200 Veterans in 2006 to over 1,300 Veterans in 2013. Research has illustrated that many Veterans find the transition from the military context to college life challenging; for example, the 2010 National Survey of Student Engagement (NSSE) found that compared to their civilian counterparts, student Veterans perceived lower levels of campus support, interacted less with faculty members, spent more time working or caring for children, and often received the least amount of help. Up to one-quarter of Veterans who have served in the operations in Iraq and Afghanistan will meet diagnostic criteria for a mental illness such as Posttraumatic Stress Disorder and/or Depression, and many may also have been exposed to blast injuries in combat, resulting in Traumatic Brain Injury. These conditions can result in a variety of difficulties in the academic setting, including irritability, difficulties with attention and concentration, and strained relationships with family, peers, faculty and staff. Since 2008, student Veterans at CCSF observed that they had few opportunities to meet and support each other on campus. They also voiced concerns about difficulties attending medical appointments at the San Francisco VAMC, due to balancing multiple responsibilities, incompatible schedules, and the medical center’s distance from the CCSF campus.  The need to support this growing group of Veterans through providing increased resources and services was recognized by both CCSF and SFVAMC staff.  Leading the initiative, Keith Armstrong, LCSW (SFVAMC) http://www.courageafterfire.com and Coach George Rush (CCSF Football Coach) facilitated a series of discussions between on-campus Veterans, local boosters, labor unions and VA leadership, to create a coordinated community effort.  They worked closely with both VA Regional Counsel and CCSF Administration to create a Memorandum of Understanding (MOU), enabling the VA to export its critical services and staff to the CCSF campus, thus forging the partnership now known as the Veterans Outreach Program. Established in 2010, the VOP at City College of San Francisco (CCSF) embeds high quality VA mental health and social work services - including psychotherapy, medication management, health care enrollment, and referrals - within a community college setting rich with post-9/11 Veterans. The program has been demonstrably effective in: (a) engaging Veterans who might otherwise not engage with VA care; (b) providing convenient VA clinical services in the academic setting; (c) actively delivering preventive care to Veterans who may be in danger of educational, vocational or personal crises; and (d) educating the local Bay Area colleges and universities about the needs of student Veterans on their respective campuses.  This is VA’s first successful college-VAMC partnership to deliver clinical services on a college campus and clearly demonstrates VA’s focus to provide personalized, proactive, patient-centered care. In 2012 the VOP hosted student Veteran day, an event in which student Veterans could attend lectures on relevant topics to student success, learn about VA benefits, socialize and have lunch. /Users/keitharmstrong/Desktop/Student Veteran Day - Save the Date - 10-25-12.jpg The VOP recently won the 2013 Silver Achievement award from the American Psychiatric Association for its service to student Veterans. I’d like to invite the audience of this Interest Group to help develop a plan for the provision of additional services both at City College of San Francisco, as well as other San Francisco Bay Area schools. While we have focused on providing VA enrollment, mental health, and social work services on campus, these encompass one type of possible services that could help our student Veterans successfully reintegrate into their communities. For example, we have considered providing recreational therapy, neuropsychological testing and peer mentorship programs as well. Other ideas include employment services (resume writing, job fairs etc.), child care services for children of student Veterans, developing presentations relevant for both student Veterans and student non-Veterans, eventually leading to dialogue about the differing ways one can serve our country. If you were running the VOP what services would you want to provide and why? Thanks! Keith Armstrong, LCSW Director, SFVAMC Veterans Outreach Program Director, SFVAMC Couples and Family Therapy Program Clinical Professor of Psychiatry, University of California, San Francisco